Kathleen Barr
Whiparella is a Lava Monster who has the ability to inflict fear on whoever her whip hits. Currently, she is a street performer in Burningham.

Whiparella owns two barbed fire whips, which are able to inflict extreme fear upon anyone who is struck by it. While a single whip brings the target's fears to life, a hit from both whips gives them a severe nightmare.

Whiparella is so scary she even frightens the Book of Monsters. She is shaped like a snake, has a whip that will call out your deepest fear and her Spider Globlins turn into that fear. Her only personal fear is being called ‘Whimparella’ – which, of course, one of the knights does constantly. 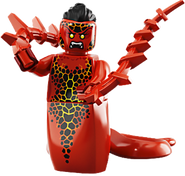