A list of Sparkks’ strengths: brute force, hard hitter and great physique. Sparkks is a cyclops, which means he is extra good at giving the evil eye. His two glowing horns, lines of magma across his body and a set of leathery wings really fulfill his evil look.

Sparkks is big - enormous, in fact, and made entirely of magma, 'cause he's a Magma Monster. The one thing he lacks: an ounce of brains. Yup. Except for a couple of pebble-sized bits of magma brains stuck in his pan, he's got nothing up there. But, really, does he need a big brain? His daily routine consists of looting and pillaging whatever village is nearby, setting a bunch of stuff on fire, getting distracted by a butterfly, and then finally fighting the Nexo Knights - and losing. 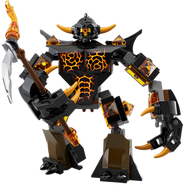 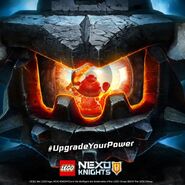