The Fall
70317 The Fortrex
The Rumble Rocket is a massive rocket built into Merlok's Library.

After learning that Monstrox had returned as a cloud, Merlok 2.0 asked Robin to build the Rumble Rocket. During this, Merlok told Robin that the project has to be kept between the two of them.

While Robin was working on Clay's Battle Suit, he told Merlok that he started working on the Rumble Rocket, to which Merlok replied that it might be needed sooner than he originally thought.

Between a Rock and a Hard Place

Merlok 2.0 appeared to Robin and informed him about their super-secret project.

March of the Colossus

Robin was briefly seen working on the Rumble Rocket while drinking a large amount of energy drink.

After all the Nexo Knights were in Merlok's Library, they activated the Rumble Rocket and began flying to battle the Stone Colossus. They failed twice to get the Rocket in range to drop the Battle Suits, but they were able to get them down. The Rocket, with Robin and Ava inside, released Mechlok down, and was able to help Clay download the entire system of Nexo Powers.

When Clay created Magic Crystal Fall, the Rumble Rocket collected the Battle Suits back inside and landed near the Knighton Castle. 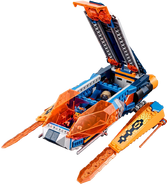