The Stranger in the Halps
70351 Clay's Falcon Fighter Blaster

Unknown
Rubblers, or Bricksters, are Stone Monsters created from the Halps rocks.

The Stranger in the Halps

The Bricksters were created from fallen rocks from mountains in the Halps. They attacked Slab Rockowski's house, and he began to destroy many of them. They later fled.

Imagine all the bricks in a house coming to life and starting to roll around looking for stuff to break and havoc to wreck. Bricksters have been caught in the structures of houses, pillars and bridges for years. Now they are free and they are having the time of their lives. They don’t ever want to stay still for even a single moment again, so they roam, roll, bounce, jump and jitter with all they’ve got. Their favorite attack is getting together in a great bunch and then piling up on they enemy until they disappear in a big block of rock.[1]

In 70356 The Stone Colossus of Ultimate Destruction 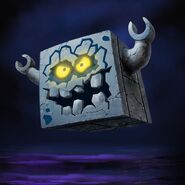