Erin Mathews
Sir Robin Underwood is a Knight-in-Training and the technician of the Nexo Knights. He functions as the mechanic of the team, responsible for tuning up the support vehicles and building weapons for the knights.

Like Ava, he was a freshman of the Academy. After the knights acquire the Fortrex from the king and queen, he and Ava made modifications to it, redesigning the exterior and interior from a vacation vehicle to a mobile knight headquarters. In most of the seasons, he functions as their support, in which Merlok recognizes his skills, giving him and Ava permission to leave/graduate school early.

Robin wants to join the knights in combat, but Clay tells him to stay as he was too young to fight. Disappointed but determined, he decides to come up with stilts to show that he can fight, though failed at first try. Eventually Merlok 2.0 helps him and after a few failed attempts, he succeeded in making robot legs. When the knights head out, Robin defeated the Lava monsters who attempted to sneak attack the Fortrex. He also comes up with the concept of Ultra Armor.

On an early morning, Robin sneaks out of the Fortrex and attempts to use his Junior Knight Shield to receive a useful Nexo Power. However, he ended up getting Rooster of Wakening instead, which the shield produces rooster crows that abruptly wake the knights up, much to Robin's dismay. During the briefing from Merlok 2.0, they learn that Jestro and the Book of Monsters are going to attack the Knights’ Academy (presumably in order to seize one of the magical books) and they have to return to school to protect it.

Robin guides the knights to the school and showcases the new orientation video he made during class to promote the school. Back in the Fortrex, he was building a new machinery to ensure that the magic books will be kept safely until they can return it to Merlok's library. He uses the machine when the library was attacked by the Lava Monsters.

The Book of Obsession

Robin, together with the knights, were appointed by the king to help deliver an important item for a Knighton Con event. After the delivery was done, he unloads his equipment and built the Mini-trex, which he intended to participate in the costume contest. He also built in a mini command center to use as a wifi extension core for Merlok 2.0, which helps the digital wizard to send Nexo Powers to the Knights over great distances from the Fortrex, albeit with Merlok 2.0 having a high pitched voice. Through his invention, the knights were able to receive their Nexo Powers. After the monsters were warded off, Robin wins the best costume contest and gains the prize, the limited edition first issue Ned Knightly comic Macy wanted.

Due to the emergence of Monstrox as a cloud and the Stone Monsters, Merlok assigns an important task for Robin to build a triangulator to combine multiple Nexo Powers into to one. In one of the test, it was a failed attempt causing an explosion in the training room which woke the knights up.

In the final stand against the stone colossus, Robin had worked tirelessly for 5 days straight to upgrade/tune up and repair the support gears and mechs. He was called by Merlok to return to the capital to work on the jet within the library, in which he was brought back by Macy to prepare for emergency measures. In a race against time, Ava contacted him to question what was the plan and return the Fortrex to the capital immediately.

When the knights retreat to the library from the stone monsters, Robin starts up the jet and pilots it close enough to drop off the knights and Merlok in his mecha body right on top of the colossus, despite the heavy damages from incoming attacks. During the battle, Robin wonders who's driving the empty Fortrex, only for Ava to conclude that Clay was controlling it. After the attack was over, Robin slept immediately afterwards, being exhausted from the battle and work.

Vehicles made for use by others

Robin Underwood is a freshman student at the Knights Academy. He is an amazing builder of gadgets, gizmos and gimmicks for the knights to use in their battle against evil. A fight he really, really, really wants to get in on. Robin may be young, but he is very impatient about becoming a full-fledged knight.[1]

Robin is the prime inventor, designer and builder for the NEXO KNIGHTS team. He is the master behind their Battle Suits, mechs and vehicles. His ingenuity is reaching new heights. Robin is still a student at the Knights Academy, but he is doing a year of ‘independent study’ – which means he is helping Merlok 2.0 build something amazing. Robin is a dedicated thinker and amazing builder. When he gets an idea you can be sure it will not be long before incredible inventions start rolling out of his workshop.[2] 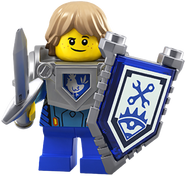