Ian Hanlin
Giles Panton (as Clay; Episode 8)
Moltor is a Lava Monster, twin brother of Flama and owner of the Hot Rock Cafe.

To say that Moltor is a hard-hitter would be an understatement. This guy has boulders for fists, which gives him a quite devastating punch. Moltor is not big on discussions and likes to let his hands do the talking. He is usually seen creating chaos somewhere near his twin brother Flama. Together they are the Hot’n’Heavy twins that deliver a 2-for-1 offer on destruction.

Moltor is Flama's brother and partner in crime. These Magma Monsters may look different, but the dastardly duo share the same goal - to make maximum trouble in minimum time.[1] 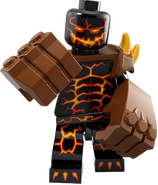 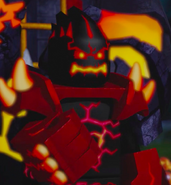