You may be looking for the app.

Alive (as a hologram)

Brian Drummond
Merlok Moorington, more formally known as Merlok 2.0, and currently Mechlok is a hologram and the mentor of the Nexo Knights. He is the brother of Ruina Stoneheart and the uncle of Clay Moorington.

Merlok was a great friend of King Halbert, who the king relied on for wisdom. He was the last known wizard in the realm. He was also a member of the Wizards' Council, along with his sister Wanda. After his sister fell into darkness caused by Monstrox, Merlok wandered across the kingdom for five years to find Clay and both of them eventually moved to the capital of the kingdom, with Clay being sent to the Knight's Academy, as Merlok hoped that his nephew won't find out his own wizard heritage. At that time, he had observed four other young kids with promising talents, whom later became the Nexo Knights.

Years ago, he sealed Monstrox's castle and miniaturized it. To ensure that it wouldn't fall under the wrong hands, he gave it to the Knights' Academy Library in a form of a snowglobe for safekeeping.

Merlok enjoyed pranking the kingdom and loved performing magic tricks for its citizens. This upset Jestro, the royal jester, who got attention stolen by Merlok.

At the graduation of five young students from the Knights' Academy, Merlok summoned a giant monster. Terrifying the attendies, the new knights fought the monster. Merlok then appeared, revealing he was behind the monster's existence and that he only summoned it as a joke. The crowd was then happy.

When it was Jestro's turn to perform, he did many acts that were messed up by himself every time. Embarrassed, he ran off crying to Merlok's library. Finding the Book of Monsters, Jestro decided to get back at everyone by being serious and a bad boy, much to the book's joy. He then grabbed a staff and began to conjure up Lava Monsters with the Book of Monster's help. Clay walked in and told him to stop, but it was too late. As Clay began to fight them, Merlok arrived at the scene. He blew Clay out of the library and locked the door.

Meanwhile, Knighton mourned over Merlok's demise. However, Merlok was very much alive. He downloaded himself into technology during the explosion, which transformed him into a hologram. He then tried to get into contact with Knights' Academy students Robin Underwood and Ava Prentis to warn them about Jestro's plan to attack the kingdom, but his image kept freezing up on their computer.

Finally, Ava tracked the signal, and she and Robin hurried to the library. They were amazed when Merlok's golden hologram appeared to them. He then sent the team of Nexo Knights Nexo Powers to aid them while Jestro's army attacked a vulnerable Knightonia.

After the battle, everybody was ecstatic to see Merlok again. However, the wizard warned that Jestro would soon be back.

When the knights settled with the mishaps of their evil replicas due to the work of the Book of Monsters and Jestro, Merlock 2.0 went through the Academy's systems to promote Ava and Robin for their contributions to stop evil. He even requested them to get back to the knights to help them fix up the mecha that Robin have piloted, in which even the knights were unsure on how to reassemble it.

In the season finale, he and Ava managed to gather the separated knights together in the battle against Jestro and the Book of Monsters from the capital city gates. He gave the knights the Nexo Powers, except for Clay as he decides to give him a special spell he haven't used for ages. Ava shuts down the engines of the Fortrex, which gives her enough power for Merlock to send the spell to Clay. After the monsters were chased away from the city, he was observing the fireworks display through the monitor screens in the Fortrex.

After realizing Clay's awoken powers, Merlok decides to reveal the truth about himself and Clay, their origins and past, which earns the knight's sympathy towards them.

As the final stand against the stone colossus, Merlok along with Ava and Robin sets up a rocket within the library, building it for 5 days straight. Robin also builds a mechanical body for Merlok, with Clay helping in transferring Merlok from the Fortrex to the mecha itself, which allows the digital wizard to be in active combat.

Merlok is the wizard protector of Knighton. He used to be a real-life wizard, but a magic blast dissolved his physical form and now he lives in the Fortrex computers as the sentient operating system Merlok 2.0. In his new, digital shape he helps the knights upgrade with NEXO Powers, but his personality is still the same. He is quirky, kind and very proud of his brave NEXO KNIGHTS heroes. But as awesome as the NEXO Powers are, Merlok stills believes things were better back in days of the good, old magic.[1] 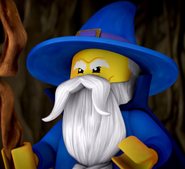