Garry Chalk
Mayor Magmar, formerly General Magmar and the Sultan of Siege is a Lava Monster and the mayor of Burningham, which he founded. He was originally Monstrox's right hand man and rides the Siege Tower.

Magmar was Monstrox' right-hand man, and he and his six brothers were known as the Seven Scourges.[1] Eventually, he was banished by Merlok and trapped in one of twelve evil books.

When you want to conquer the world with an army of monsters, you need a good general to command them. General Magmar is the greatest strategist, warrior and cook the Book of Monsters has ever produced. He talks in big words and fights the big fights. Too bad he rarely wins...

You want to rule the world with a monster army? You need an amazing general. Magmar's the greatest military strategist and warrior I've ever seen! Fierce. Powerful. And maybe a bit fancy? He uses big words and educated -sounding stuff - like an artist or philosopher. Most monsters? They growl a lot. Magmar? He enunciates excessively. I don't even know what he's talking about half the time. Still, he gets the job done a lot better than those other bottom-scratching lava brutes. Plus he's an amazing cook! You have just GOT to try his Magma Chip Cookies.

The commander of the Magma Monsters' army is very self-confident. General Magma thinks he is a military genius and master of tactics. Everyone else thinks he should just stop talking quite so much.[1]

Ultimate General Magmar is just like the regular general, but even fiercer, with some wicked new weaponry. Oh, and as he can't wait to tell you - with his Ultimate weapons, he is more amazingly great at everything than before.[1] 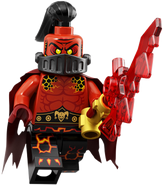