This is a list of references made to other LEGO themes in Nexo Knights.

The Moorington family's falcon crest is a modified and modernized version of the Black Falcons logo.

The Golden Castle is a reference to 375 Castle which was made of yellow bricks. Additionally, the Knights' uniforms in the episode resemble the old Castle uniforms. 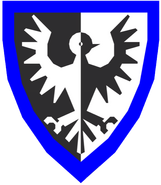 Éclair uses the chef's torso print in a miniaturized version on his minifigure.

The Series 3 Witch appears in the webisode "The Way to Battle."

The Lion Temple can be seen when the knights are first going though the backgrounds of the simulator in "The Power of Merlok." Furthermore, Eris appears as a hologram in the training room in "Broom of Doom."

In "The Golden Castle," one of the movies suggested to Lance is "Knightjago 3," where the main characters "spin around to defeat bad guys," a reference to Spinjitzu. Not long after this, a Squirebot wears a mask (intended to represent Monstrox) that resembles Lord Garmadon's appearance.

Dingo and the other rock monsters in "The Maze of Amazement" resemble the Craglings from the first season of Ninjago.

The mask of Garmadon