Lancelot "Lance" Richmond is one of the five main heroes of Nexo Knights and the son of former knight, Cuthbert Richmond. Lance has a love for acting and theatre, and in several episodes he claims that becoming an actor is his dream and true passion.

According to an interview with the writers of Nexo Knights, Lance became a knight to be in the media's attention.[1] However, in the episodes The Knights Of The Realm and Greed is Good?, it is shown that his parents forced Lance to become a knight despite his protests.

Lance is a Nexo Knight on a quest to protect Knighton from Jestro and the Lava Monster Army.

"Lance likes a good fight against evil monsters, but he loves being famous. Born and raised in a wealthy family, things have always come easy to Lance and he wants it to stay that way. All that fighting just messes up his shiny armor and curly hair and makes him look less than perfect in pictures."

"Lance is a NEXO KNIGHTS hero and he likes defending the realm against monstrous attackers, but his heart really beats for fame. Since he was a little boys he has dreamed of being a celebrity with his own TV-show. After the defeat of Monstrox, his dream came true and he has his own show. So as dark clouds gather over Knighton and a new threat rises, Lance must search deep within himself and make a difficult choice: Am I a NEXO KNIGHTS hero or a celebu-knight?"

The Book Of Monsters Description, by Jestro[4]

"DEAR KING HALBERT, I really admire Lance. Not just because he's rich and famous, but because he loves his fans as much as they love him. I once asked him for an authograph and he signed the top of my jester's hat. I didn't wash it for three months! I hope I can be as gracious as him when I become famous!"

Lance's defining character traits are that he's very full of himself, and very spoiled. He does not enjoy training very much and would much rather lounge around relaxing, or go clubbing. He doesn't like taking orders and prefers to impulsively rush into things without much forethought. This doesn't mean that he's dense or unintelligent, however, as in the Lucky To Be Lance webisode he is quick to realize Lavaria's nefarious ploy. He also seems to have a fondness for animals, based on his immediate attachment to Hamletta and recurring animal motifs associated with him.

Often times he enjoys annoying team leader Clay, and getting a reaction from him. This usually leads to the two butting heads due to their differing approaches to knighthood, but Lance still respects Clay and cares about his well-being. Despite this he genuinely cares for his friends as much as he cares about himself, often setting aside his pride and admit that he's wrong for their benefit and trying to be courteous of their feelings. And though he is spoiled, he often tries to share the things he loves most with them, as well, such as offering his soda to Clay and Macy, and asking them all to star in a movie with him.

He seems to harbor some insecurities about himself and how he is perceived by others, based on dialogue in multiple episodes. This is evidenced in Fright Knight, where Lance is shown to be afraid of obscurity and being ignored, and how he belittles himself in The Power of Merlok to admit that he was being hypocritical. It's addressed again in one-sided conversation he has with Hamletta in The Book of Total Badness and The Might and The Magic. Additionally Lance is passionate about theatre, and frequently makes puns and references based on various plays and movies.

Lance wears a newly-molded breastplate and pauldrons, much like the other knights, and a white helmet with metallic accent. Upon his breastplate he wears his family crest, which is light blue with a white horse's profile. The top of his helmet is shaped similarly to the horse's mane on his crest. His suit's arms and legs are a grey color, with lines going down his arms and his legs having white and orange-gold accents. His torso seems to have grey chain-mail under accents of white armor.

Under his helmet he has neck-length blond hair. The hairpiece used for his physical minifigure is a slightly curly hairstyle, and even described as curly by LEGO.com, however in the show it appears to be much straighter and spiky, while also looking slightly shorter. His face has defined cheekbones with a bit of a cleft chin, blond-colored eyebrows, and he's depicted with a smug grin on his physical minifigure.

Battle Suit
Add a photo to this gallery 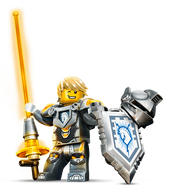 Add a photo to this gallery

Add a photo to this gallery