Knighton News Network
Register
Don't have an account?
Sign In
Advertisement
in: Nexo Knights, Episodes, The End episodes,
and 2 more

Not to be confused with the character.

Dave Osborne
Jerry Forder
Krakenskull is the sixth episode of the fourth season of Nexo Knights, and the thirty-sixth episode overall. It first aired on August 28, 2017.

Jorah Tightwad is digging for gold but finds the ancient Lord Krakenskull buried with his army. This stone army is exactly what the Cloud of Monstrox needs.[1] 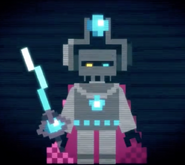