Knightonia is the overseeing Kingdom and central hub for Knighton trasportation and general area of maintence. Holorails can easily trasport its main civilians and outsiders throughout the land, circling the largest city in all the realm. 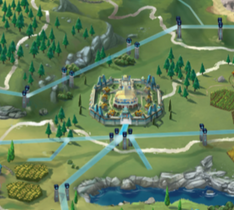 Guarded by a singular fortified gate all holobridges interwoven into a final holobridge and direct towards the city's wall - south - entrance.

The Kingdom is divided by its inner ward and outer ward all circling around the main Joustdome; a site where most of the grand entertainment and Knight's graduation take places.

There several area within Nexo Knights which are seen in the main TV shows several times and sometimes even focus of the episode.

Since the foundation of Knightonia, the capital help mantain the several realms throughout Knighton. Most Regions are govern by Nobles or official Mayor, given the freedom - and depending whether on good terms or not - to support the kingdom with influence and marketing. There remain certain region not within the Kingdom's control such as the petrified forest, the swamp lands, and the once unused Lava Lands.

Realms consist of villages underneath their control or within the land's namesake.