Brian Drummond
Vincent Tong (Roberto Arnoldi's vision; Episode 23)
King Eggred Halbert the Benevolent[1] is the king of Knighton and the husband of Hama Halbert, a commoner. He is the father of Princess Macy, one of the Nexo Knights.

King Halbert and Queen Halbert's relationship with Jestro, their jester, was somewhat distant, which eventually lead to him becoming evil. The King was also was a close companion and an admirer of Merlok, and was relieved to see the wizard come back digitally as a hologram after he had sacrificed himself.

King Halbert is somewhat incompetent at his job, mostly relying on Merlok for advice. He is a cowardly pacifist and a lover of peace who would rather no one have to fight at all, however accepts that it is a necessity.

He is also protective of his daughter, Macy, and originally wasn't sure about her becoming a knight. He had to be convinced by his wife to allow their daughter to officially graduate, and even after agreeing to allow her to graduate as a knight he was still a little apprehensive of her knighthood. However, by the series finale he has fully accepted her knighthood and held a knighting ceremony in her honor.

Despite not showing much, King Halbert have efficient leadership skills, having planned some emergency situations when the kingdom was in trouble. He even became braver, having engaged in combat together with the Queen with great teamwork and efficiency.

Even though he is the king, King Halbert is quite a timid man. He is scared by any dark, loud noise and can get quite nervous when he thinks of what tomorrow might bring. He likes going to tournaments and giving speeches a lot more than fighting evil monsters. He loves Knighton and will do anything to keep it safe. Even if it means letting his beloved daughter join the fight at the frontline.[2]

Hey, Halbert broke with tradition and married a woman of common stock. Gotta give him some props for not marrying an entitled princess. What a pair of Royal Losers. He's Mr. Promote the kingdom, and she's Mrs. Let's mash some monsters. The King's family tree is like a mature walnut grove during late spring - full of nuts.

The Knight's Code: A Training Guide

His Majesty, King Halbert, is one the Knights' Academy's most famous students. His father, King Thinneous "The Nervous" Halbert II, worried about his son's future (he worried about almost everything). But after King Halbert attended the academy, the world was his oyster - his end-of-term project was about ancient mapmakers who used mollusks as navigational aids. Though he proved himself as a knight, it was really his benevolence that got him recognized. He was always very thoughtful and good, and tried to make everything around him just and fair. (In fact, he organized the first "Just and Fair Fair" while he was a student.)

King Eggred Halbert rules his beloved Knighton fairly and wisely. He especially enjoys traveling, meeting his subjects and making speeches. He's no warrior, but he will defend Knighton with all his might - if he really, really has to.[3]

Poor King Halbert! All he wants to do is quietly tour his kingdom delivering speeches (the longer the better). Instead, he has to arm himself and lead a nerve-wracking fight against the evil in his realm.[3] 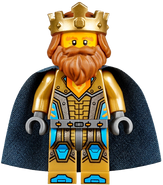 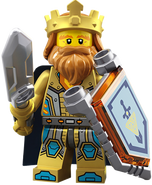 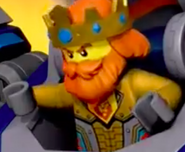