Vincent Tong
Jestro is the royal jester of the King and Queen of Knighton. As a child, a Knight entered him the Knights' Academy to try and be a Knight, but he was not very good at it.

After leaving, Merlok took him under his wing and tried to help him get a job, and ultimately got him one as the King's jester. He was very proud of his job, though insecure.

After causing a power outage after messing up his act, he ran away in fear and met the Book of Monsters, who he would act with and become evil.

Before his corruption, Jestro had white skin with red lipstick, a dark teal cape with bronze bells, and purple and sky blue striped clothing, including a jester hat.

After his corruption, Jestro remained white-skinned, but the sky blue on his clothing changed to red. Additionally, his bells changed to skulls, his clothing became tattered, and his eyes and teeth turned yellow. His now-twisted smile kept the same red lipstick he previously wore.

In the unproduced Season 5, he wears a blue and orange outfit with a golden belt and jester balls.

Jestro is, above all else, incredibly insecure. He's shown to frequently get stage fright, though he seems to be getting better, as he enjoys being on live television, and has little to no self esteem. His nerves often cause him to mess up his performances, and even before becoming a jester he failed at becoming both a knight and a wizard, leading him to feel he can't do anything right. Despite this, he still tries his best, even in the face of repeated failures.

He's also very emotional, and is easily upset. This, tied in with his tendency to make impulsive decisions without being properly aware of the situation, and the fact that he's not always the smartest gets him into bad situations, allows him to easily be manipulated. He's desperate to do something right for once, and be good at it, but sometimes puts that need above even his own morals, which was what caused him to go evil in the first place.

He has no problem going with whatever he's gotten himself into as long as he thinks he's doing relatively well, and falls for even the emptiest of praise without recognizing it's not genuine. He's also easily intimidated and scared, and Monstrox gladly takes advantage of all of this without Jestro being aware of it.

However, despite willingly turning evil in the first two seasons, with little hesitation, he's not actually a bad guy, he'd much rather be on the side of good if he can. He cares a lot about his friends, especially Clay Moorington, and seems to show more reluctance to attacking them than things like becoming evil or attacking the general public.

He even starts to rethink attacking the castle as he heads there simply because, while it would be a great strategic move, the king used to be really nice to him, and he'd feel bad. When the situation arises, he's even willing to sacrifice himself for his friends.

While corrupted, his personality completely changes, especially as he starts to embrace being evil. He becomes more willing to attack anyone in his way, whether he used to have personal ties to them or not, and gains a lot more confidence in his actions. He also becomes less of a pushover, and more inclined to at least try to take charge.

Many of the spellbooks, after being found, further alter his personality, such as the Book of Greed making him more obsessed with finding and having gold than actually doing evil. The effects of these seem to be more temporary than the Book of Evil's original corruption effect, though, and rarely have an impact for longer than the episode they're featured in. Not all of the effects of the corruption disappear completely afterwards, either, as some of the confidence he gained and his willingness to stand up for himself remain.

Jestro isn't shown to have a lot of talents, and what few he does have he doesn't seem to recognize. Be that as it may, he's shown to be a great comedian, entertaining the knights and the entire town of Funnyton.

He hasn't been shown to wield any weapons normally, but both times when working with Monstrox, he's had a staff. He shows excellent use in these abilities of the Forbidden Powers.

Jestro is not bad. He is just no good at being good. Or funny for that matter. He was King Halbert’s jester and every day people laughed at him. Except for when he actually tried to be funny, then they fell silent. One day Jestro had enough and he seized the opportunity to become so powerful that no-one would ever dare laugh at him again.[1] 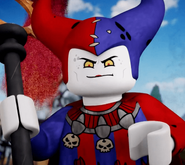 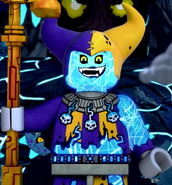 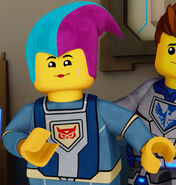