Giles Panton
Grimrocs are stone monsters that were created by Monstrox. They were petrified in Rock Wood Forest after a magical battle between Monstrox and Merlok.

Despite all these lost souls, not everything's lost. You see, there was once a big battle in a place known as Rock Wood. I lured Merlok and his forces and had a bunch of monsters waiting. But that magic man turned my monsters into petrified trees! What about the Forest Monsters? They prefer to spend time with less 'stiff' companions.

Here's the plan - I go back to Rock Wood and use my zapping powers to turn the petrified monsters into Grimrocs - BIG Rock Monsters! These guys will make monstrous additions to our army and 'petrify' everyone they meet! 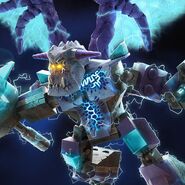