Unknown
Globlins were formerly creatures serving as minions of the Lava Monsters, and now currently live in Burningham.

Globlins are ball-shaped creatures with big. yellow eyes and lava-esque features on their faces and backs. They have large fangs and sharp teeth, along with red skin. Although most are red, some Globlins are orange. They can also grow to a very large size, as the biggest ones have been seen in the set 70314 Beast Master's Chaos Chariot.

Twenty-four Globlins, according to The Book of Monsters, can create a Bloblin. However, according to the Nexo Knights Handbook, five Globlins become a Bloblin, such as the ones on the Chaos Chariot, which are otherwise described as massive Globlins. There are also Spider Globlins.

Imagine a red ball the size of a soccer ball. Now imagine it bounces up and down and left and right with enormous power. Imagine the ball is on fire. Now imagine it is made of lava, has vicious little yellow eyes, a mouth full of teeth and a maniacal laugh as it chases you. That is a Globlin.[link unavailable] 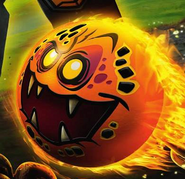 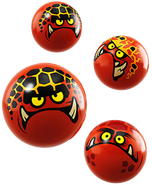 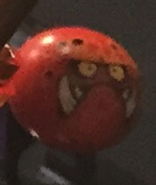