General of the Gargoyles

The Cloud
70356 The Stone Colossus of Ultimate Destruction

Noel Johansen
General Garg is a Stone Monster and the general of the Gargoyles. He is second-in-command to Jestro.

Garg was once a part of Monstrox's Gargoyle army, and was originally from Ghoulia.[1] Garg was either made out of blackened granite,[2] or was struck by some of Monstrox's fireballs,[3] to obtain his darkened color. Eventually, he was trapped and petrified under Ghoulia. 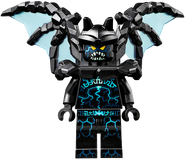