Squirebot
Member of the Merry Mechs

Michael Donovan[1]
Dennis is a Squirebot who formerly served as the Squirebot of Lance Richmond, but eventually joined the Merry Mechs.

Dennis has always been with Lance and his family. He has watched young Lance grow up into a strong knight and it fills him with pride. What doesn’t fill him with pride though, is when Lance is rude or unfair. Dennis makes sure Lance always looks great and lives up to the proud Richmond name.

Lancebot has the hardest job in town. Lance grew up rich, so he is used to everything being done for him. He has learned to appreciate Dennis more and not take him for granted all the time, but Lance is a Richmond and being spoiled is simply in his DNA. Dennis has quit before and been on the verge of short circuiting for years, so the question remains; will Dennis stay in Lance’s service?[2] 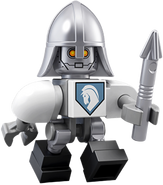