Knight Out
70311 Chaos Catapult
Crust Smashers are Lava Monsters who formerly drummed for Monstrox. Currently, they live in Burningham.

The Crust Smasher is a very difficult lava soldier to fight. Solid lava stone crust with molten lava on the inside. He has a punch like a rock, but if you hit him too hard, he breaks open and lava sprays out and burns all around him. 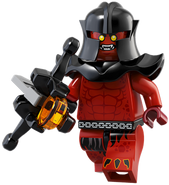