Giles Panton
Sir Clay Moorington is an orphan from Dnullib and a Nexo Knight of the Moorington family. Abandoned as a child by his sorceress mother Wanda Moorington, he was taken into the care of Merlok, a sorcerer and magician. He gained an appreciation for knighthood and chivalry and entered the Knights' Academy. In his younger years, he befriended a young jester named Jestro.

He joined his teammates, the Nexo Knights, in graduating from the Academy. He attempted to save his father figure Merlok from Jestro, now turned evil, and the Book of Monsters, but failed. He nearly gave up being a knight before Merlok was uploaded into the system, making him digital.

After going through many adventures, he was able to obtain the Book of Betrayal, but eventually betrayed the Knights and traded the Book for Jestro. However, he was then nearly sacrificed to become Monstrox's human form, but he was able to use Techcalibur and destroy Monstrox.

While hiding from Monstrox, now reborn as the Cloud of Monstrox, he was struck by his lightning and began his transformation to stone. During this time, he began training Aaron Fox to become his new replacement as the leader. He fully turned to stone when trying to save Queen Halbert from his then-unknown mother.

After being found as a statue, the Knights kept him on the Fortrex, wanting to follow in his example. However, Monstrox was able to electrocute him, transforming him into the Gray Knight, a villain who served Monstrox. When attempting to destroy the Knights, Merlok struck him with a powerful spell, causing him to lose the evil inside him.

Because of his anger issues, the Knights accidentally drove him away, causing him to attempt meditation, but failing. He also had an inability to hurt Ruina Stoneheart, a sorceress, before realizing that she was his mother. Devastated, he placed himself in a solidarity chamber to protect anyone, but when Macy reopened the chamber, he managed to self-sacrifice himself.

After awakening thanks to his newly-found magic abilities, he used his magic to assist in battling the Stone Colossus. He downloaded Nexo Powers into himself and was able to control the Fortrex to hit the heel of the Colossus, destroying it.

After their victory, Clay's magic was generally hard to control, causing issue to the Knights during their battles. Because of this, Clay set off on a journey of self-discovery to the original meeting location of the Wizards' Council.[1]

Clay has spiky, brown hair. He has thick eyebrows and is usually seen with a serious expression. Other than that, his defining facial features remain limited. He often wears dark blue or blue armor fitted with darker blue highlights.

In the third season, Clay slowly begins to turn to stone. His body slowly becomes grayer and stiffer, and he is seen mostly in his Battle Suit. In "Hot Rock Massage," his condition worsens to the point where only his head isn't stone. In "In Charge," he completely turns to stone.

In the fourth season, he is reborn as the "Gray Knight," with his eyes turning yellow to show that he is evil/angry. He is later removed of the evil for a bit. His hair also turns blue in the process.

After being reborn in "March of the Colossus," his hand becomes imbued with blue magical energy coursing through his veins.

Often referred to as the "uptight knight," Clay's defining characteristics are that he likes to be organized and dedicated to knighthood. Though sometimes coming across as somewhat reserved, Clay is also quite emotionally-driven, and values justice above all. He can be shown to be somewhat shy, embarrassed, nervous, or otherwise bashful when he is shown on the big screens unexpected in public. But when it comes to interviews, he can also show to be brave and daring to answer the questions asked. He states that he has based his entire identity on The Knight's Code and its values.

Though usually confident in his abilities and skills, sometimes to almost arrogant degrees at times, he has a fear of failing to save somebody,[2] especially in failing to uphold the values of the Knight's Code. Obsessed with training, he prefers to spend every waking hour either training and preparing for battle, or actually battling the forces of evil. He only sleeps 2 hours a day.[3] He is commonly seen training in the Holo-Gym despite it being 5:30 am in the morning.[4]

Valuing hard work and practice with a need to micromanage and lead, this often causes Clay to butt heads with Lance often due to their conflicting values and beliefs. However, even though they don't always quite see eye-to-eye, the two respect each other.

Clay can also often be seen trying to hide a smile when Lance is cracking a joke or making a pun, or sometimes even joining along with his antics, implying they share a similar, corny sense of humor. Similarly, he usually disapproves Aaron's childish and immature behavior. But despite that, the two are quite good friends and Clay can see the potential within Aaron and asked him to become his successor temporarily when he is absent.

In battles, Clay is a skillful knight, with a unique fighting style against his enemies. Clay is also trained in using swords in battles, making him a great swordsman. Clay also has a shield that he can use to download Nexo Powers.

Clay has an incredible ability with magic and even more powerful than his mother or uncle.[5] However, using the magic within him seems to wear him out physically, as he's too drained to join into battle after being released from his magic stasis.[6] However, he's able to figure out how to download the Nexo Powers data from the system into himself.[7] 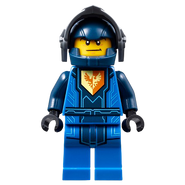 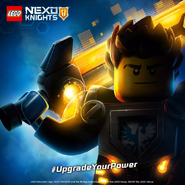 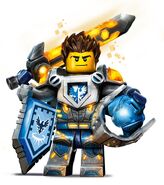 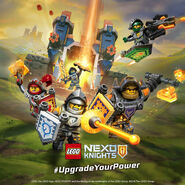 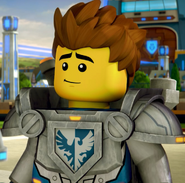 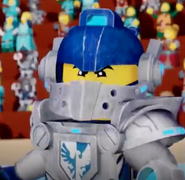 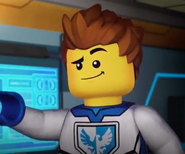 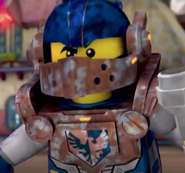 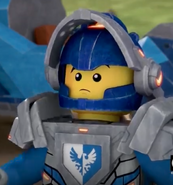 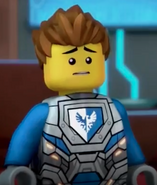 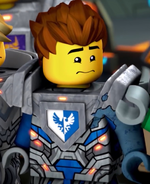 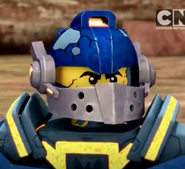 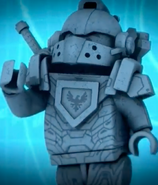 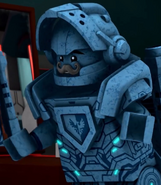 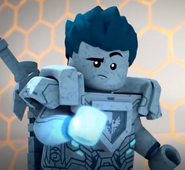 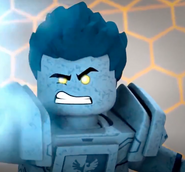 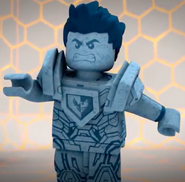 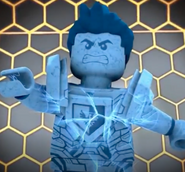 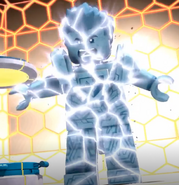 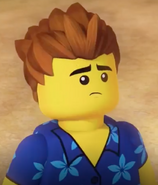