Giles Panton
Beast Master was the former commander of the Chaos Lava Monsters, and currently a resident of Burningham. He wields ball and chains and drives the Chaos Chariot.

Beast Master was walking around Burningham when Clay Moorington noticed he could make a good decoy for a Rogul statue. He tried to practice using his chains but ended up tying himself up. He then was painted gray and wore a cloak and stood in place of the Blazing Burn Rogul.

Some Grimrocs took Beast Master, thinking he was the Rogul, onto the Rolling Headquarters. He stood still until nighttime, when Monstrox struck him with his lightning, causing him to be revealed. He told them that they were fooled and ran away back to Burningham.

Monsters are beings of chaos and craziness and therefore very hard to control. That is why you conjure up a Beast Master to wrangle the villainous monsters into order. Unfortunately the Beast Master already has his chains full with two extra crazy Globlins. They are uncontrollable and drag around their “Master” from place to place.

Ultimate Beast Master might have an explosive temper—but this time he's got his hands on dynamite! Throw the sticks at the opponents or whizz the manic Globlins around on chains! Cause more carnage by sucking energy from your enemies. Upgrade your battle skills by scanning shields to obtain 3 NEXO Powers for your digital collection of unique abilities to outsmart your enemies in the free LEGO® NEXO KNIGHTS™: MERLOK 2.0 app. Scan for 3 NEXO Powers: Globlin Attack, Spirit Vortex and Dynamighty.[2]

Now this guy is from the Book of Chaos, and he's completely out of control. See how he burnt through the pages of this book? He was actually supposed to be on page 72, but he tore his way up here. I put Beast Master in charge of my Globlins, including those two on his arms. He calls them Muffin and Poopsie; Not the kind of names you'd expect for fearsome creatures right? Well, Beast Master ALWAYS does the unexpected. Yeeoowwww! He just made Muffin bite me! And he had Poopsie kiss me! I NEVER expected that... 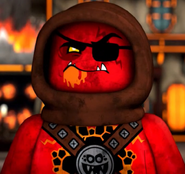