Marÿke Hendrikse
Lady Ava Prentis is a young genius and specializes in technology and keeps things in order around the Fortrex. She commonly is the one who works with Merlok 2.0 all of the time and sends the Nexo Powers to the Nexo Knights.

Ava woke up and prepares herself in the control room, though annoyed by Robin for using a loud Nexo Power. During a briefing, she figured out the reason that Jestro was attacking the village was because it was the hometown of the Knight's Academy librarian. She and Robin guide the knights to the school and mentioned that the intake of students have increased drastically due to the need of training more knights.

She contacts the knights that Jestro have already infiltrated the library and scans a Nexo Power for them.

During the final stand against the Stone Colossus, Ava starting a transfer of Merlok from the Fortrex to Mechlok. In the battle, she monitored Clay's magic index, exclaiming that it was off the charts and was surprised that the later manages to transfer the Nexo data from the entire system to himself.

Ava Prentis is a brilliant freshman student at the Knights Academy. She is a technological wonder child and a programming power girl who assists Merlok with getting the NEXO Powers to the knights. She is strong-minded, quick-witted and often ends up in discussions with Merlok about whether magic or technology is the real strong weapon against the monsters.[2]

Ava is an amazing programmer and the chief technician aboard the Fortrex. The whole NEXO Power project is the result of the combined powers of her and Merlok 2.0. Ava is focused and devoted to her work, not letting herself get distracted by things like small talk or hanging out with others. TAFK (Time Away From Keyboard) is the worst thing she knows and she is most comfortable when she is in her chair, telling Merlok 2.0 to focus and figuring out a serious technical problem in the middle of an enemy attack.[3]

Ava is Robin's classmate at the Knights' Academy, and she is one seriously tech-savvy student. Her ability to stay calm in a crisis and provide quick-thinking solutions gives the knights a huge boost when they are in battle.[4]

Ava is one of the younger character, with short legs and dark lavender pants, as well as a dark lavender suit with white lining and a grey belt. Her sleeves are a light shade of lilac, and she has a white, futuristic strap with a yellow light. Ava's hair is dark brown, reaching down to her chest. 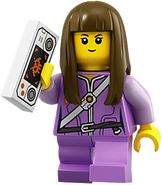 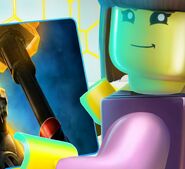