The Fortrex and the Furious
70310 Knighton Battle Blaster
Ash Attackers (also known as the procession of evil accolades) are Lava Monsters who wield spears and can fly using their bat-like wings. They are made of volcanic ash.

Some Ash Attackers provided vocals for Monstrox's recreation into human form. First they were criticized for their performance but later chanted when he was turning into a human once more. 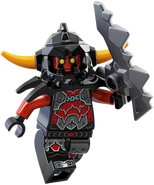 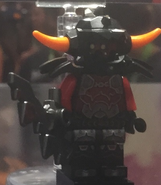