The Book of Monsters - Part 1
70310 Knighton Battle Blaster
Armor is fundamental clothing built to protect a Nexo Knight from attacks.

The original power armor[1] (also known as techno armor[2] or Nexo Armor[3]) features heavy armor built with semicircular shoulder pads and the crest of the Knights' family on the middle. The color of the helmet and gloves depended on the Knights' family crest; the visor was also stylized. 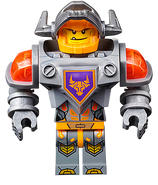 The new armor[4][5] is an updated version of the old armor. The shoulder pads changed from a semicircle shape to a rugged-built one, and the armor was built more similarly than previous. The color of the gloves became silver and the color of the sleeves were built to be the same as the Knights' family crest.

The armor was also built to be more resistant to Forbidden Powers and also slightly altered to fit the Knights' personalities, like Axl's stomach having a large section and Aaron's built more like a jumpsuit.

In the sets, Clay's helmet is a lighter color of blue and all of the visors are trans neon orange, to fit the color of Nexo Powers. The armor was also more sleek than the previous one.

The Battle Suit uniforms are simplistic suits built for placing Nexo Knights into their specific Battle Suits. The Knights' family crest is displayed in yellow and orange in the middle of the suit, and there are no shoulder pads.

The suit is simplistic, and the armor is typically colored the color of the family crest and another slightly darker color.

The trans neon orange armor[6] is a specialized version of the new armor with the original shoulderpads from the power armor, but in trans neon orange. Axl is the only one not to receive one.

The pearl gold armor[7] was the armor for the unproduced fifth season of the series. The armor was made to be more high-tech and stylized with golden elements. The visors stayed orange, but the gloves changed to a gold color. It was fitted with high, gold shoulder pads with rigid edges. The Knights' family crest was yellow with an orange background.

Clay's armor was quite different from the other Knights, as he lacked shoulder pads and his crest was built into his armor due to his magic. Robin would have his specialized Black Knight armor and helmet with the gold shoulder pads.

This section is a stub. You can help expand this section by adding some information.

This section is a stub. You can help expand this section by adding some information.