Alessandro Juliani
Sir Aaron Fox is a stuntsman and daredevil from Grindstead. He became the leader of the Nexo Knights once Clay Moorington was turned to stone starting "In Charge".

As a child, Aaron loved to make mischief and doing dangerous stunts/pranks together with his brothers. Due to this, he was constantly in trouble. As his antics went out of hand, his parents sent him to the Knight's Academy, hoping that he would learn discipline there.[1]

Aaron was born and raised by the sea and he has a simple goal in life. Find the ultimate thrill. Right now it is riding his cool hover board while fighting evil lava monsters. Pretty cool, right? Not to mention dangerous! But as Aaron says; no danger, no fun! In the rare occasion that Aaron needs to chill, he likes to play computer games with Axl or just ‘vegging’ on the couch. He never sits still for long before he is out there again, chasing the next thrill.[2]

Aaron is a thrill seeker, a record breaker and a care-free kind of guy. He takes life as it comes and tries to make the most of it. He is always trying to push the limits and see if he can go faster, higher or further. Or just beat Axl at a video game. Aaron loves to tour the kingdom in search of extreme sport records and break them, but breaking records is starting to feel like a broken record. Perhaps the next boundary Aaron must cross is not out there in Knighton, but within himself?[3]

DEAR KING HALBERT, I only wish I could be as brave as Aaron Fox. He is completely fearless, embracing danger the way some of us embrace our cuddly toy dragons at night when we're scared of the dark. I'm not saying I do that. At least, not if the Knight-Light is working. As for Aaron? Dark, light - it doesn't matter. He is the extreme of extremes... Unstoppable. Unbreakable. And unforgettable.

This Knight needs to learn to chill. (Though he claims to be 'very chill'.) He's always zooming about on his hover shield like a reckless flying squirrel; zipping around up here in the sky, not looking where he's going. One of these days he's gonna slam into me and I'll teach him a lesson.

Aaron has messy, auburn hair and a small soul patch on his chin. He is usually seen with an excited expression and has a notch on his eyebrows, which are thinner than the other Knights'.

Aaron, like all the other Nexo Knights, has a newly-molded helmet and shoulder armor that depicts his trademark crest on his torso. His suit's torso and legs are a gray colour, while his arms are a silver and his hips and hands a green colour. He is complete with orange highlights. 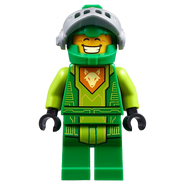 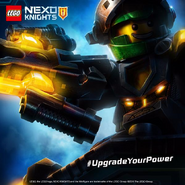 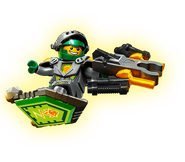 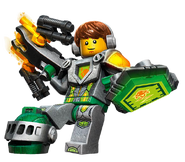 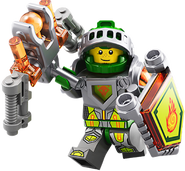