70353 The Heligoyle
70352 Jestro's Headquarters is a Nexo Knights set released in January 2017. It comes with Lance Richmond and Macy Halbert in their 2017 armor, Ava Prentis, electrified Jestro, a Stone Stomper, Gargoyle and Rubbler, the Cloud of Monstrox, the Forbidden Power of Corrupting Crush, four Nexo Powers, the Underminer, the Stone Wheeler and the Rolling Headquarters

This started out as a bit of a joke from me, we were briefed to build a mobile base. I thought of a cool name: Highly Evil Attack Destroying Quarters. Built this vehicle, with a flying hat and with a bed, desk and toilet in the back (his quarters) and put it up against the other guys models. Kids loved it. The other designers not so much. The name changed as it didn't translate well and the tower shrank so the bedroom/toilet disappeared as the design was finalized, but it's essentially the same thing I built in a single day when we first started on this year![2] 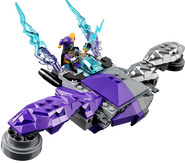