You may be looking for the vehicle.

Evil rears its ugly head at every corner in the kingdom of Knighton, home of the heroic LEGO® NEXO KNIGHTS™ knights. Protect the realm and play out epic battles with the futuristic Rumble Blade, featuring 3 detachable vehicles, and a core base vehicle with 2 spring-loaded missiles. Includes 5 minifigures: Clay Moorington, 2 Clay Bots, Ash Attacker and Scurrier.

A separating vehicle which includes two motorcycles... I might be getting too predictable. I took a sketch model of a six wheeled vehicle by Luka K. and added my sword flyer to the top then spent a few weeks trying to figure out how to make some of the wheels come off as other vehicles. I think it came out quite nice.[2] 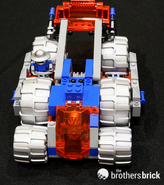 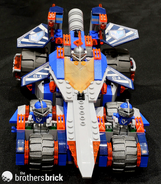